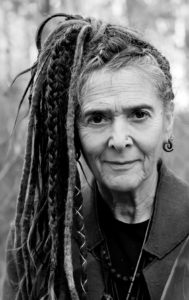 Words people use to describe me: Passionate. Intense. And sometimes even Wise, though I was born to play the Fool. I am a believer in both the sacred and the profane! My greatest gift is gathering people together to speak, dance, drum, and play their way through life’s biggest questions and their deepest grief. Ritual anchors my life.

As a therapist at the St. Charles psychiatric ward in Bend, Oregon and a healer in the metaphysical realm, I connect people to the transformative power of group work and collective healing. In this work, I offer the teachings of my dear friend and mentor Sobonfu Somé, an African spiritualist who taught the rituals of her Dagara tribe for releasing grief and renewing the soul.

For almost four decades I have guided seekers on their paths through Tarot, palmistry, and intuitive consultations. The beauty and complexity of our inner mysteries continues to astound, delight, and fascinate me.

A devotee of art, theater, and music, the stage has been my home since I was a young girl. In college I trained as an actor at Bard and went on to pursue experimental theater and group ensemble work in New York, San Francisco and Europe. I played a starring role in the classic 1983 feminist underground film Born in Flames. After many years playing different life roles off the stage, it is thrilling to perform and speak in front of large audiences again. I was a cast member in  the 2017 Vagina Monologues in Bend and have been a frequent guest on Shanan Kelley’s Night Light Show. I was also a presenter at the 2018 TEDxBend.

Above all, I am the fiercely proud mother of Rowan and Kieran, my greatest loves.

All images on this site have been brilliantly captured by photographer and artist Carol Sternkopf.